For the first time, the Food and Drug Administration has approved a digital pill — a medication embedded with a sensor that can tell doctors whether, and when, patients take their medicine.

The approval, announced late on Monday, marks a significant advance in the growing field of digital devices designed to monitor medicine-taking and to address the expensive, longstanding problem that millions of patients do not take drugs as prescribed.

Experts estimate that so-called nonadherence or noncompliance to medication costs about $100 billion a year, much of it because patients get sicker and need additional treatment or hospitalization. 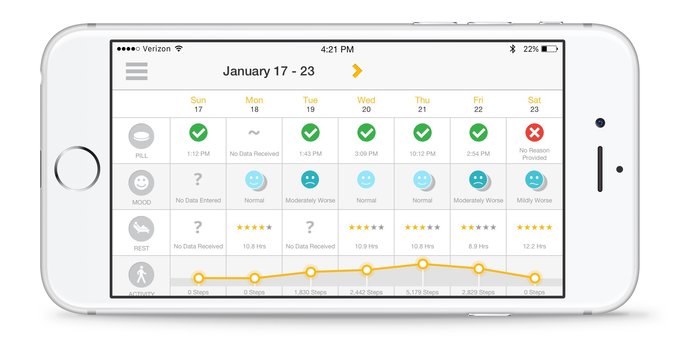 Abilify’s digital pill collects data on compliance, as well as mood tracking (and, yes, there’s an app for that)

The article goes into detail on how it works:

After several minutes, the signal is detected by a Band-Aid-like patch that must be worn on the left rib cage and replaced after seven days, said Andrew Wright, Otsuka America’s vice president for digital medicine.

The patch sends the date and time of pill ingestion and the patient’s activity level via Bluetooth to a cellphone app. The app allows patients to add their mood and the hours they have rested, then transmits the information to a database that physicians and others who have patients’ permission can access.

The author discusses the possible ethical implications, including patient privacy. Dr. Jeffrey Lieberman, Chairman of Psychiatry at Columbia University and New York-Presbyterian Hospital, argues: “Is it going to lead to people having fewer relapses, not having unnecessary hospital readmissions, being able to improve their vocational and social life? There’s an irony in it being given to people with mental disorders that can include delusions. It’s like a biomedical Big Brother.”

The digital pill has sparked much discussion. Some reaction from other publications:

“Many of these people do not recognize that they have a disorder, or they don’t like the side effects of medication, or they stop taking it once they feel better. And those things would not really be addressed by a pill with a sensor.” Dr. Dolores Malaspina, Psychosis Program at Icahn School of Medicine, Mount Sinai, New York, NY. (Time)

“The patient would have to give us permission to monitor compliance first. And this raises myriad ethical considerations such as informed consent, privacy issues, and data stewardship.” Dr. Orly Avitzur, Medical Director to Consumer Reports, Tarrytown, NY. (Consumer Reports)

“The Hype of Virtual Medicine”

Will ‘virtual medicine’ transform the American health-care system? Will the latest computer-based technologies—apps, wearables, remote monitors and other high-tech devices—make Americans healthier? That’s the promise made by tech gurus, who see a future in which doctors and patients alike track health problems in real time, monitor changing conditions and ensure both healthy habits and compliance with drug and therapy regimens.

If it all sounds too good to be true, that’s because it is. Computer-enabled technology will indeed change the practice of medicine, but it will augment traditional care, not catalyze the medical revolution prophesied by Silicon Valley. Machine learning will replace radiologists and pathologists, interpreting billions of digital X-rays, CT and MRI scans and identifying abnormalities in pathology slides more reliably than humans. Remote observation of patients will be used in tele-intensive care units. And monitoring technologies will make it easier to treat patients at home, facilitating more out-of-hospital care.

But none of this will have much of an effect on the big and unsolved challenge for American medicine: how to change the behavior of patients.

So begins this lively essay by Dr. Ezekiel J. Emanuel, the Vice Provost and Chair of the Department of Medical Ethics and Health Policy at the University of Pennsylvania.

The only interventions that seem to change the behavior of patients in a lasting way are financial incentives (mainly to stop smoking) and long-term, face-to-face relationships with nurses and health-care coordinators. These interventions are decidedly not high-tech. They are high-touch, and they remain our most effective prescriptions to treat chronic illnesses.

The British Journal of Psychiatry, November 2017

Anxiety and affective symptoms are prominent features of schizophrenia which are often present in the prodromal phase of the illness and preceding psychotic relapses. A number of studies suggest that genetic risk for the disorder may be associated with increased anxiety long before the onset of psychotic symptoms. Targeting anxiety symptoms may represent an important strategy for primary and secondary prevention in schizophrenia.

The importance of anxiety in schizophrenia has long been recognised. Indeed, Sigmund Freud considered psychotic symptoms to arise as a defence against underlying states of heightened anxiety, and Bleuler highlighted affective disturbance among his fundamental symptoms of schizophrenia. An increasing number of studies now provide experimental evidence suggesting that heightened anxiety may be important in both the development of psychosis and psychotic relapses. This work highlights the fundamental importance of anxiety and affective symptoms in the disorder and the potential to target anxiety symptoms in primary and secondary prevention. He closes with a call for action:

Relatively few studies have examined the potential for targeting anxiety and affective symptoms as a means to primary and secondary prevention in schizophrenia, but those studies that have taken this approach are encouraging and suggest that more systematic investigation of anti-anxiety treatments in the management of schizophrenia are warranted.